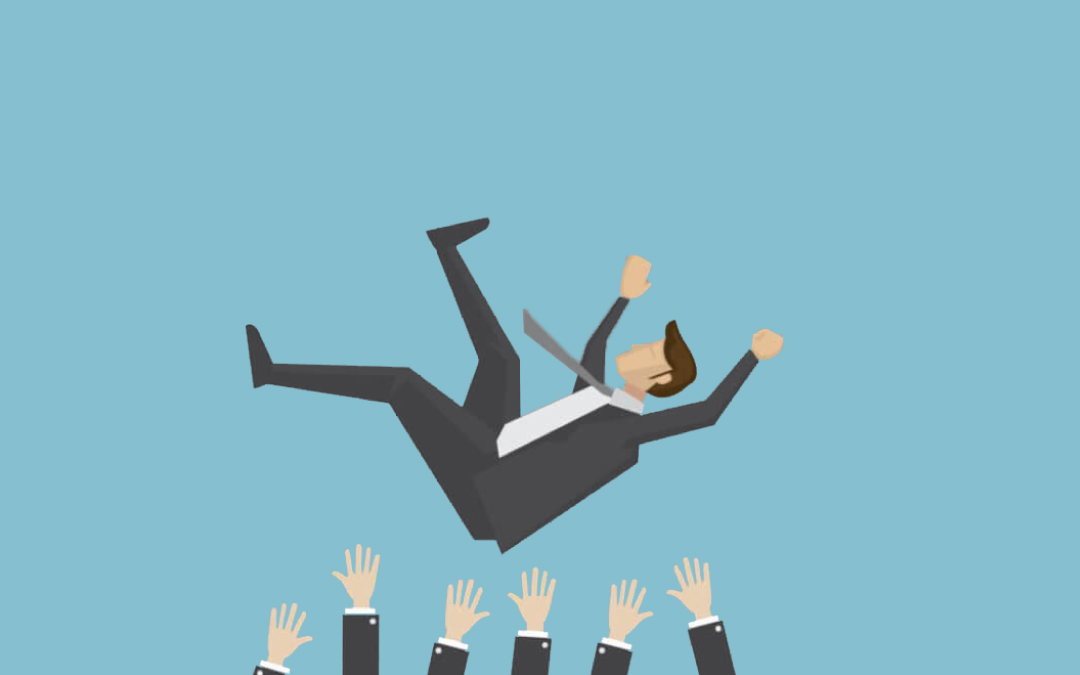 The Truth Is Always Trending

Good relationships are built on trust. Whether it’s between romantic partners, brands, customers, or government agencies, trust is the currency rate by which messaging is valued against. So, how much is your word worth? In today’s hyper-polarized landscape, it really depends on who’s speaking.

In fact, the world is moving apart in trust. According to the 2018 Edelman Trust Barometer, “In previous years, market-level trust has moved largely in lockstep, but for the first time ever there is now a distinct split between extreme trust gainers and losers.”

No market saw steeper declines than here in the United States. The U.S. saw a 37-point aggregate drop in trust across all institutions. After all, this is the era of fake news, social media bots, and a react first, research later mentality.

For the first time in Trust Barometer history, the least-trusted institution was media. That also includes social media, platforms, and search engines. Yet, perhaps surprisingly, voices of expertise are now quickly regaining credibility. And that’s great news for CEOs. 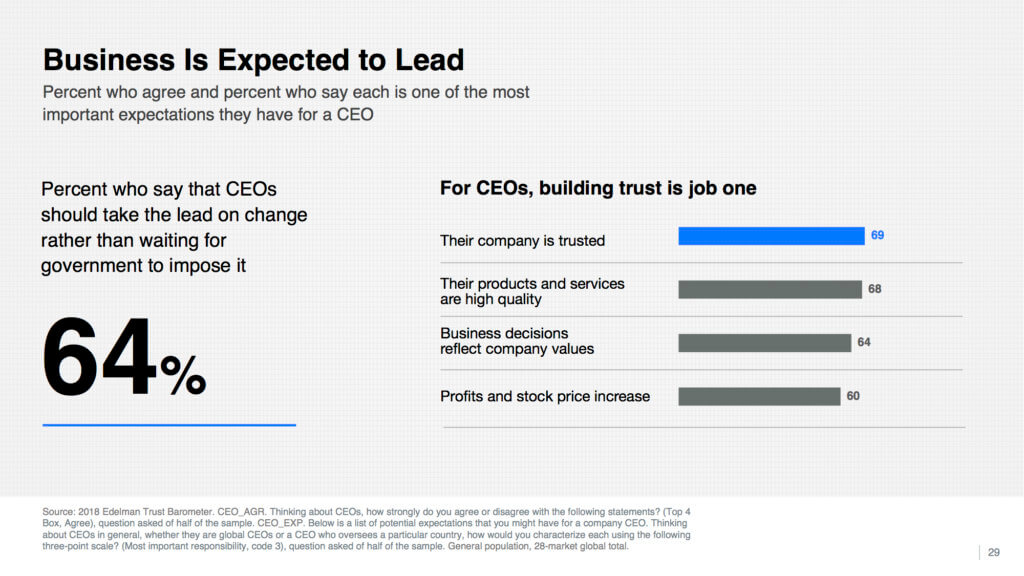 As trust in large institutions fades away, CEOs have the opportunity to establish credibility for their brand. How can they do this? For one, they can start by living their values.

Take a look at Delta Airlines. In the wake of the deadly Parkland shooting in Florida, activists online began pressuring companies that offered discounts to the National Rifle Association to sever their ties. Delta, along with others, chose to end their relationship with the NRA. Naturally, the political right responded with proposed boycotts, canceled memberships, and in some cases, threats of physical violence.

As a result, Delta faced a decision that many brands in this politicized, post-capitalist whirlwind must face: Take a stance and potentially divide your customer base in half, or remain neutral and try to appeal to everyone? Delta doubled-down.

“Our decision was not made for economic gain and our values are not for sale,” CEO Ed Bastian issued in a company-wide memo. “We are in the process of a review to end group discounts for any group of a politically divisive nature.”

Our values are not for sale. Delta may take a financial hit in the short term, but when a brand demonstrates consistent behavior and a purpose beyond profit, it’s going to excel in the long-run. That’s how you build trust. That’s the power of values-based decision making. It’s okay if your values don’t match up with everyone. Those who agree with your views will follow you with a renewed dedication. As we’ve said before, if you’re for everybody, you’re for nobody.

We really can’t say enough about trust. We’ve written about the trust economy, how brand purpose drives trust, the need for trust with your employees — and there’s a good reason we tackle this topic from so many angles. While trust will always remain supreme, the way people define it is always changing. Just take a look at this timeline from the Edelman report. 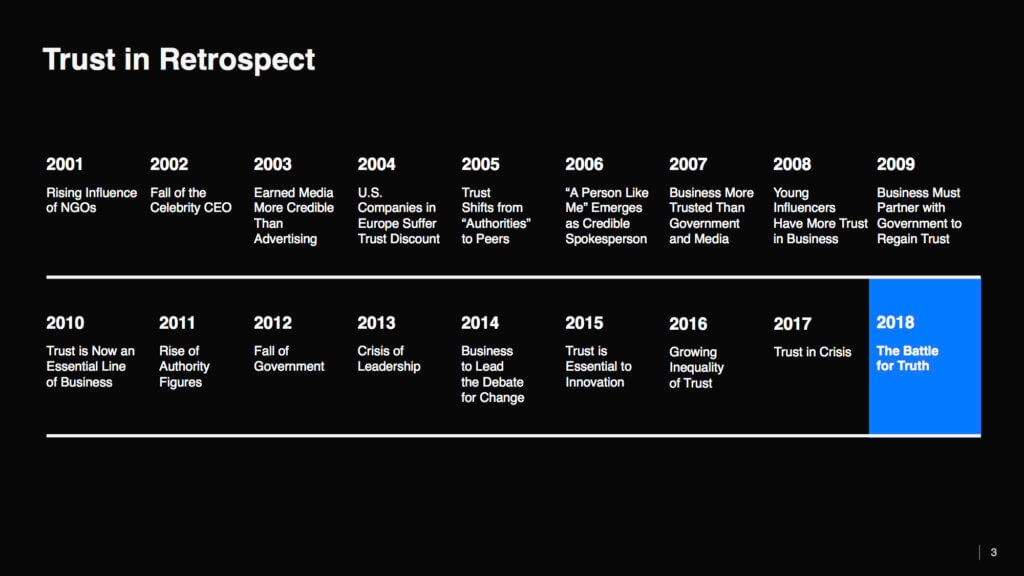 Establishing long-lasting trust can feel like trying to hit a moving target. As we parse through the statistics, here are some insights and implications for today’s CEOs.

Insight: 56% of people believe that companies that only think about themselves and their profits are bound to fail.

Implication: Your company doesn’t have to be an NGO to think outside itself. Providing transparency in the supply chain, supporting worthy causes, and demonstrating diversity and gender equality in the workplace are all ways of elevating a brand’s trust.

Insight: 60% of people believe that most CEOs are driven more by greed than a desire to make a positive difference in the world.

Implication: You must have a clearly articulated purpose. Here’s the thing about core values: they will still be there if the market shifts or customer preferences change. Hence, brand purpose becomes the anchor that keeps the ship afloat, even as the seas churn.

Insight: 64% of people believe that CEOs should take the lead on change rather than waiting for the government to impose it.

Implication: To employ some bumper sticker logic, be the change you want to see in the marketplace. Warby Parker didn’t wait for customers to get better healthcare, they responded with the Buy a Pair, Give a Pair program to give people the gift of sight.

In the battle for trust, the truth is not self-evident — but CEOs have the opportunity to make it so.

Emotive Brand is a brand strategy and design agency in San Francisco.