The Lasting Mark of Black Creatives 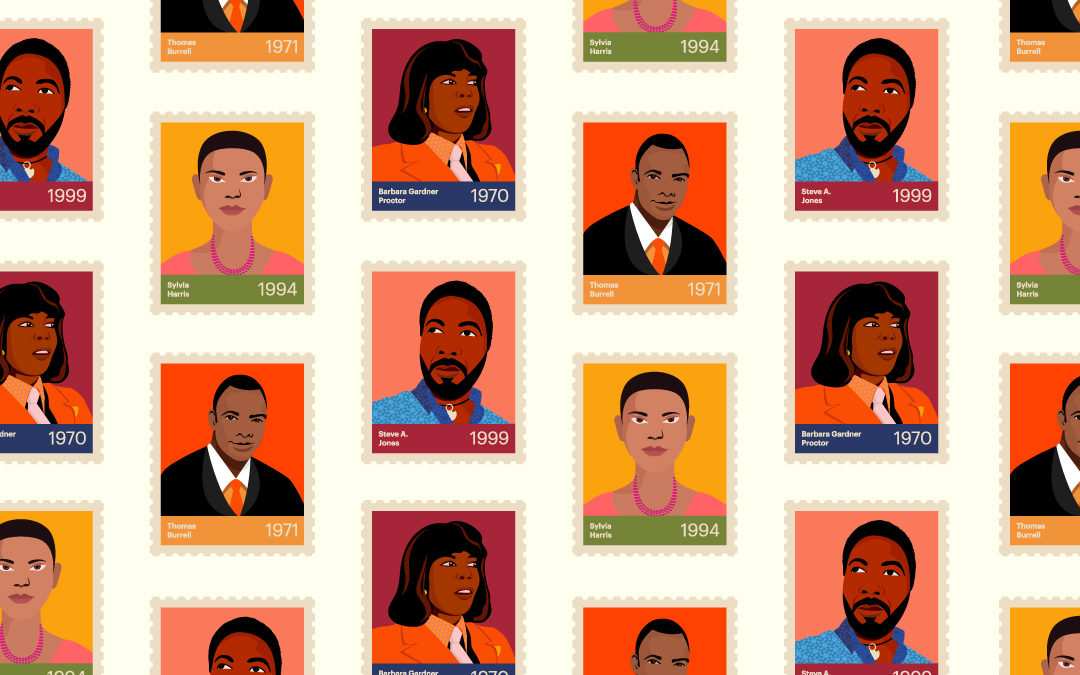 There are endless reasons to celebrate Black History Month. But following last year’s civil unrest due to decades worth of racial inequality and blatant injustices faced by the African-American community on a daily basis, we feel a huge responsibility, especially as an agency based in Oakland, to not only speak out and show up for the Black community but be intentional with our actions at every touchpoint. And for us, this meant celebrating Black History Month was an absolute imperative.

This month, we’ve chosen to highlight the careers of Black creatives within branding to not only honor them but emphasize the importance and impact of having their voices active and present in professional, predominately white spaces.

In case you missed it, here’s a recap of all nine features: Bill Howell was the first African-American Art Director of a chain department store, J.M. Fields, on the east coast in the 1960s.

Bill began his career in graphic design through apprenticeships that gave him the exposure he needed to jumpstart his career in advertising design.

Although met with discrimination and limited opportunity, his desire to reframe the negative depiction of African-Americans in commercial advertising fueled his perseverance and career trajectory. Barbara Gardner Proctor was the first African-American woman to found an advertising agency, Proctor & Gardner Advertising, in Chicago in 1970.

Barbara began her career at Vee-Jay records, a Black-owned record label in Chicago where she wrote publicity material for album releases—soon playing a significant role in the release of The Beatles first studio album in the U.S.

After moving on to work for multiple advertising agencies, she would soon be fired for refusing to work on a demeaning haircare ad targeted for Black women which pushed her to start her agency working with clients like Kraft, Sears, Gillette, & Jewels food. Tom Burrell was the first African-American man to climb the corporate ladder at an all-white advertising agency in 1961 at Wade Advertising in Chicago pitching his way from mailroom clerk to Junior Copywriter.

Tom spent years ghostwriting for accounts like Robin Hood All-Purpose Flour and Alka-Seltzer having little to no contact with his clients to hide that he was Black.

Seeking to spread his wings, Tom went on to found his marketing communications firm, Burrell Communications, in 1971 that became a groundbreaking agency in the African-American and urban youth markets creating campaigns for clients like Coca-Cola and McDonald’s. Clarence Matthew Baker (known as Matt Baker) was one of the first successful African-American comic book illustrators in the 1940s and 1950s.

Matt was responsible for creating “Voodah” the first-ever Black superhero, in Crown Comics #3. After its original publication, the character’s appearance was changed to appear White.

Towards the tail end of the Golden Age of Comic Books, Matt shifted gears from superhero illustrations to illustrating titles for romance comics—an emerging genre that began to attract a primarily female audience. Gail Anderson is an award-winning NYC-based graphic designer, writer, and educator at the School of Visual Arts.

Gail has worked for many design firms, magazines, and publishing companies throughout her career, but she is most known for her 14 years worth of illustrations and typographic work at Rolling Stone magazine where she eventually held the title of Senior Art Director.

Having illustrated famous magazine covers and posters for well-known Broadway plays, Gail is most proud of her 2013 USPS postage stamp design commemorating the 150th anniversary of the Emancipation Proclamation. Thomas Miller was a graphic designer and visual artist in the early 1960s-to-late-1970s and one of few African-American’s in Chicago to lead multiple identity redesigns for well-known consumer brands.

Thomas began his career working at Morton Goldsholl Associates, a design and film animation studio—one of the first progressive advertising studios in Chicago known for hiring people of color and women in a professional capacity.

As a key designer at the renowned firm, Thomas led identity rebrands for clients like Motorola in the 60s, designing the batwing “M”, and 7UP in the 70s, introducing the bubble formation logo. Steve A. Jones is a Jamaican-American graphic designer and educator based in Oakland.

Steve pursued his bachelor’s degree at the California College of Arts, where he experienced professors who consistently disapproved and rejected his artwork—realizing they wanted him to dial back his cultural approach to art.

Shortly after graduating, Steve realized the power in his cultural approach to art becoming a designer at YSB (“Young Sisters & Brothers”) magazine at B.E.T, where he worked for an all-Black art department for the first time, later starting his design studio, Plantain Studio, and becoming an Associate Professor of Graphic Design at San Francisco State University. Sylvia Harris was an African-American graphic designer and design strategist most notably honored for her commitment to remove barriers through designing human-centered public information systems.

Slyvia, having grown up in the south in the 1960s, witnessed and had a clear understanding of how a lack of accessible social systems could affect people in their daily lives.

Her expertise in design strategy led her to work on projects for high-profile clients including the government, where she was responsible for the redesign of the 2000 Census Bureau—presenting an opportunity to increase participation and change the perception of the Census brand. Maurice began his career as a professional Basketball player, having played around the globe, before making a transition into design full time—working on identity projects for clients like Nike and Google.

In addition to his current role as Principal Designer for Microsoft, Maurice is the Executive Director and Founder of Inneract Project (IP), a design education organization that focuses on helping underserved BIPOC youth channel their creativity and explore opportunities in design professions.

Not only do we acknowledge and disapprove of the lack of Black representation within Corporate America—we understand that we have a responsibility to not only educate ourselves but use our platform to educate others, create space for and honor the Black professionals who have and continue to break down barriers and pave the way for a more equitable future.